Just took this sample from our croquet lawn mowed at .100. Push-up green built in 2018. I think our greens program is working!

We are now in week 2 of our range maturation process.  The only headwind is the lack of rain thus far. Last week we only received 0.20 inch of rain and it was hot and windy for the weekend.  The Pro Shop parking area will remain closed because of irrigation overspray that would hit cars.  We irrigate with canal water that contains salt and hard water that will leave unwanted spots on your car. The range tee has been mowed 4 times and is close to its desired height.  The greens were mowed for the first time yesterday and are only at 10% complete toward desired height.  We will continue to mow, roll and topdress them to get them trained to greens height.  It takes time…. The range targets were sprigged and not sodded like the tee and green areas.  This process takes a lot more time for maturation and water is more frequent.

The range net supplies are starting to be delivered.  We received the bottom part of the net last week. Next week the poles will be delivered and the following week the net is on its way.  We are still scheduled for install by mid August so let’s hope the trucking stays on schedule!  Steps to the range mat pad are scheduled to be installed this Saturday and practice mat will be installed 1st week of August.  Thank you for your patience in allowing the process to mature.

Total Golf worked all weekend to get the range area grassed and completed. There was a couple day delay with rains from T.S. Elsa flooded the sod farm and delayed harvesting.  We are now in the “grow in” stage of the renovation. In the next 6 to 8 weeks, the grass will go from 1 inch of sod or sprigs to being cut below .100 of inch for the greens and ready to roll!  Time is the biggest factor outside of sunlight, water, nutrients, sand and mowers to achieve our desired goal of a putting green/teeing surface.  The new turf has to root and become mature enough to withstand practice shots and foot traffic for putting.  So please stay off the work area as the turf is being kept wet and damage could occur.  #1 Greenside bunkers were renovated and are finished as well.  The bunkers are ground under repair and please drop out of the area no closer to the hole.  The bunker slopes are loose as the sod is being established.  Periodic watering everyday is being performed to help with establishment of the turf.

We are now awaiting the range net company to install netting at the east side of tee and eastern side of range along #9.  Material has been ordered and in 2021 fashion is backordered.  The range mat will be installed the first week of August along with a paver path and concrete repairs.  Always weather dependent, I still believe the range should be open at the end of August assuming the netting will be delivered and installed. Thank you for your patience in allowing the turf to mature!

We aerified the greens yesterday to allow air and water movement in the greens profile.  The greens will be “sandy” for the next week.  The forecast is rain from TS Elsa the next few days.   The range project is scheduled to be grassed this week and delays could happen if heavy rain persists.  We will continue to work diligently to finish the improvement as the weather allows!

Photo below shows #9 green profile with an aerification channel.  This allows roots to grow as well as water and oxygen to move in the profile.  Also note the sod layer from 2019 (dark bottom layer).  Aerification allows us to break these layers to give proper green soil function.

We’ve been getting some much needed rain without impeding our work on the range and course.  We now are on week 3 of range improvements and are heading for the home stretch.  Total Golf is now down to leveling the surfaces in preparation for sod next week.  The range tee is being lasered leveled today and all surrounds are being groomed and smoothed.  Targets will be shaped and ready for sprigs as well.  Drainage has been installed in the chipping green and #1 greenside bunkers. I’m hoping to get the concrete contractor here this week to pour the mat pad and concrete repairs.  They have been delayed due to the rains on other projects so if rain persists we may be delayed.  The pictures below are from yesterday and the range is looking good!

This week the range tee will continue to be lowered about a foot and shaped toward the center of range.  The range tee is being moved back 10 yards toward parking and a new mat will be at the back of the tee.  The putting green is now lowered and shaped.  The construction crew will tie in the putting green area to the new range mat pad/tee area.

Last week the old range mat was removed and will be repurposed into an artificial sod stacked bunker westside of chipping green.  We are also removing sand from #1 greenside bunkers today to use on the targets in the range.  #1 greenside bunkers will be ground under repair for the next 4 weeks until repaired and resodded.  We also repurposed some of the palm trees that were along the range tee. They were relocated near the garden room area.  A net and additional landscape will be added to the east side of range tee and extended in range 100 ft to help protect errant practice shots from windows and golfers.  We have generated quite a bit of fill that will also be used to help enhance drainage and reshaping the practice area.

The bunker rakes are back! Rakes should be left ½ in ½ out for ease of retrieving.

When entering bunkers, always enter the low side of bunkers.  This will avoid any trip/fall situations.  After playing from the bunker, go ahead and use the rake to smooth the sand in the bunker. Try to make it look like no one has disturbed the sand since the maintenance staff groomed the bunkers that morning.  Then exit the low spot of the bunker and push sand toward the center of the bunker so that there isn’t a buildup of sand near the edge. 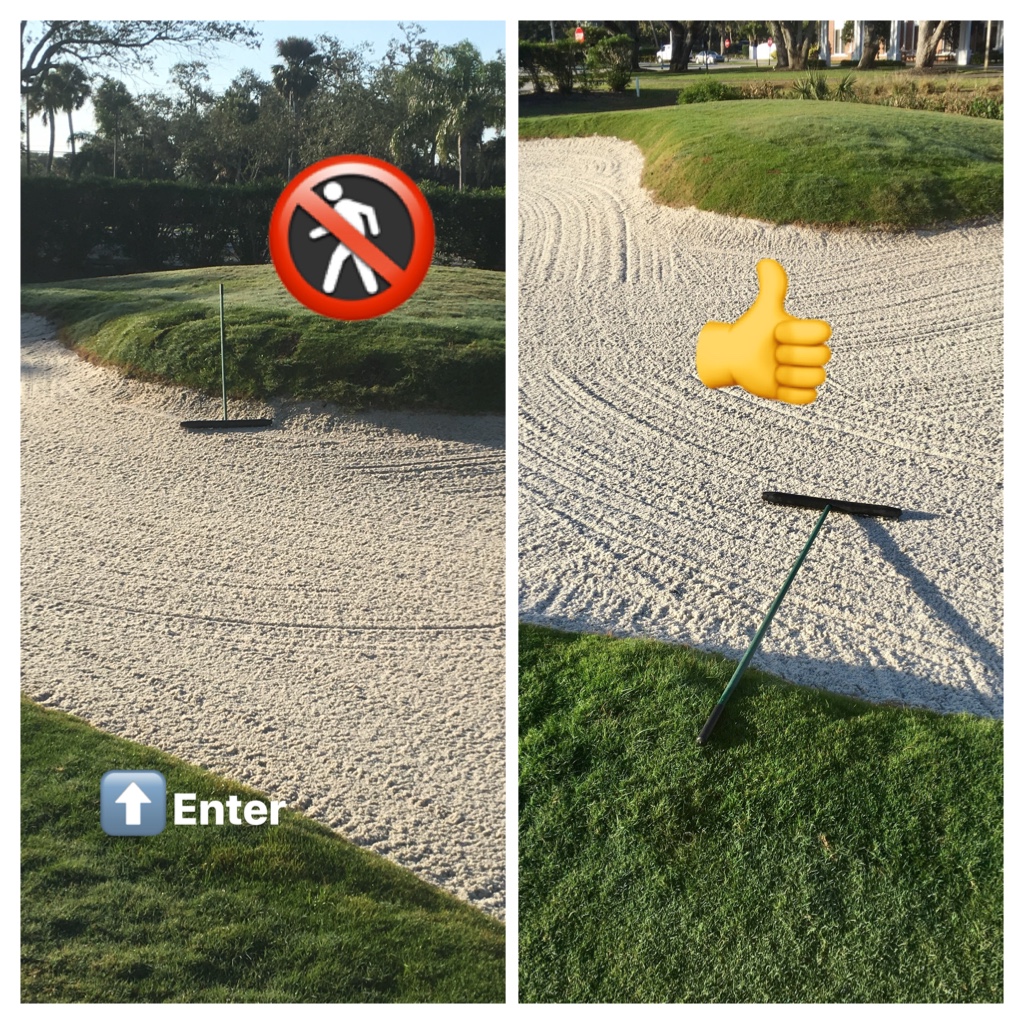 Rain has been scarce for July thus far. When you factor in 90 degree days with heat indexes above 100 degrees it is just survive time for the turf and people.   The greens are susceptible to disease and turf thinning so heights have been raised to a safe number for the rest of the summer (they are going to be slow).

The weeks leading into the aerification of greens on July 9th, we got aggressive with our dethatching of the surface during play and the greens had some brown and thin spots.   The greens are getting older (15 years on the Front/12 years on Back ) and I have to be aggressive with my dethatching program so they can perform well in the winter.  Remember, the turf grows less in the winter, but our golf play is at the peak (not really ideal for the greenskeeper).  Tees and fairways were dethatched as well so brown spots and lack of rain creates a “brown spot” quick!

Reminder:  Greens deep tine aerification August 20th.  Tees, fairways and roughs will be aerified and verticut as well.  (There will be some brown spots because of dethatching)

The picture below 93 degrees on July 17 at  5:39 pm in Vero.  These temperatures are tough on turf, employees and golfers!  BTW we didn’t get any rain despite the “forecast”

Work continues on 18. Total golf expects to finish next week. It has rained all 3 days this week thus far. Tomorrow we will lower irrigation pipe and add pop ups around green for Sod next Tuesday.

Picture below of shaping of 18 approach

Below:  #5 bunker renovation started today.  The nose was removed and washout area sodded.  Drainage will also be added as weather permits

We’ve had two Monday closings and the only aerification that we’ve done is solid tining greens last Monday.  Last Sunday, we received 2 inches of rain and today we’re heading to 4 inches of rain.  We will just try and aerify tees and fairway’s the next two closings.

A 100 percent chance of showers is expected Monday, with possible thunderstorms before 2 p.m. and before 8 p.m., weather officials said. Some of the storms could bring heavy rainfall.

Tuesday through Saturday will have a 70 percent chance of showers. Temperatures throughout the week will fluctuate between the low 80s and low 70s.

I would expect some cart path only conditions over the next few days.